Ever wondered what it would be like to escape civilization to a place with nary a television and barely a phone? In 1983, David Fagan arrived on the Saronic island of Hydra, Greece, for an hour’s stay, ripped up his return ticket, and marooned himself as a permanent inmate of “the Rock.” Through a series of anec-dotes, affectionately termed “rhubarbs,” he paints a vivid por-trait of life among quirky expats and loveable locals on a unique island during a bygone era, before the first world and the twenty-first century caught up with him.

Order a hard copy through CreateSpace or Amazon or the Kindle edition from Amazon.

Rhubarb! is available on Hydra in hard copy for sale at 15 euros at Christina’s Speak Out Boutique in the centre of the port front and at Theo’s Pirofani restaurant in Kamini; Hydra’s Historic Archives and Museum on the left hand side as one enters the harbor has a few too. 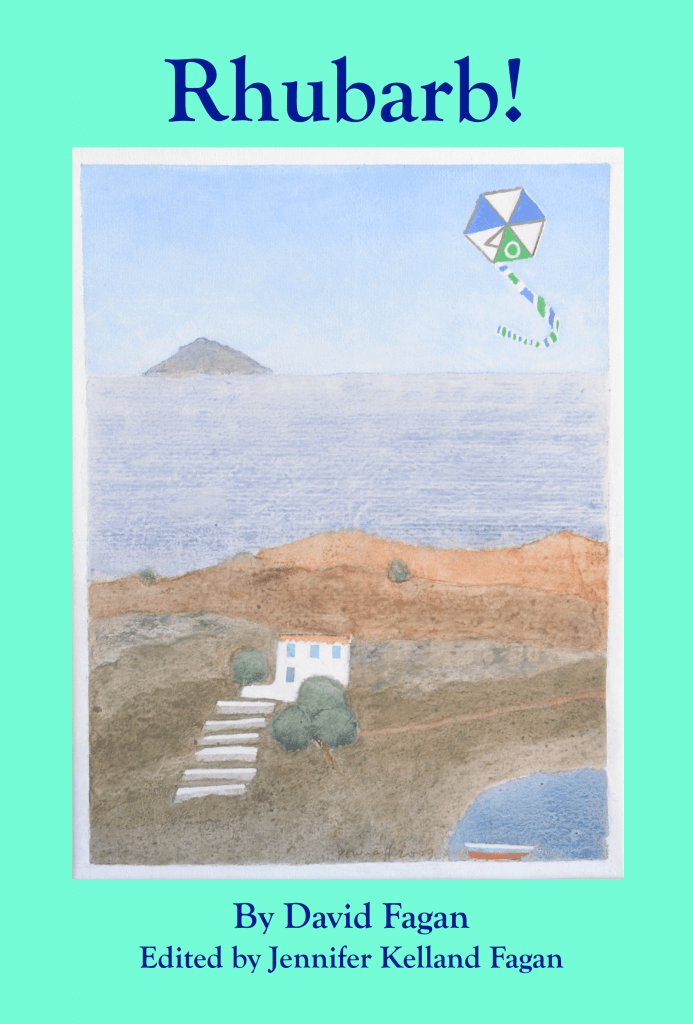 Rhubarb! A collection of affection anecdotes about life on Hydra

I’ve already read it cover to cover with much chortling & giggling! People are asking me what’s in my drink. —Ferri Emami, England

Having visited Hydra myself I was really looking forward to reading this book. Even if you have never been to a Greek Island you should read this, it is so funny and you can almost picture the rhubarbs of the island! A great read, and one I will read again and again! I recommend this book to everyone! You will not be disappointed. —Kathy Craze, England

Have received the book and almost finished reading it. I think that it is great and extremely humorous. It does bring back memories of a bye-gone Greece as well as the present Greece, especially when building a house here. Thank you for a great read. The penuary has been worth it.— Peter Gaitan, Greece

Hi David…..just finished reading the book abt 10 mins ago…..couldn’t hardly leave it down since picking it up…..eventually…..from Theo in Pirofani yesterday evening…..I was reading it well into the wee hours of the morning, (abt .0300am)’ and nearly chocked myself trying to stifle my giggles and bursts of laughter, in order not to waken up the other slumbering folks in the house in the middle of the night!,,,,,,,!!!!!!!!!….. Sleep finally overcame me, and my strained and tired eyes gave away my sleepless night all through the day today, BUT..’/.fait’ accomplished…I really enjoyed the oh so clear pictures you conjured up of the so so true to life descriptions of life on the ROCK, which having lived through and experienced so many similar situations myself over the years of being a local, just had me chuckling from start to finish!
What else to say….great ! ….thanks for such an enjoyable and entertaining book, can’t wait to read it again …
Fondest regards Valerie Papoutsis, Greece

Just finished Rhubarb and loved it! I like your way of describing events and people in this compassionate, amiable (but at the same time critical) way as you do. What I especially liked the facts I learnt about the death of Manolis. I have always heard he was killed (slain) by the police. Somehow I was relieved that this was not the case. You are a very good writer, I think and do hope you will go on writing. — Ulrika Tornberg, Uppsala, Sweden.

I finished reading Rhubarbs! in its new incarnation with much delight along the way. Quite a banquet, tasty, and the helpings were as large on the plates as in the glasses.  BIG congratulations for evoking the Hydra snafus, smells, tastes, the changing cast of (dare I call them) characters, so many of whom I’ve known well or in a thousand passings on Donkey Shit Lane.  A deft gem it is.  More, please! —Alison Gold, New York & Hydra

Your book is great, read it in one day, laughed and trembled with memories, thank you and lots of love to both of you—Solveigh Kaehler, Athens & Hydra

Spent some time yesterday reading your book. It was an absolute joy to read and had me smiling from ear to ear. It is very well written and you should be proud of yourself. —Richard K, Canada

Just had to say, love your book full of little  Hydra happenings. So envious of your life. —Julie Haughton, UK.

Read what readers had to say about the first edition, Rhubarbs from a Rock:

Daaavid. you are the mooost wonderful author!!! I LOVED your book – the way you write is so full of colour I could actually SEE what you were writing about – I could see the food strapped to the donkeys and sauce all over the place……..

I had such …a good time reading it – you guys are courageous to stay on the rock for long periods of time. Talking to my husband about a possible visit next year. I wish you electricity and water NON STOP (instead of love and hugs) as I’m sure they will be more appreciated, love and hugs anyway, you deserve them. MOUAH. —Diane R. Williams Khalil

I would have written back sooner, but have just been released from the hospital after a brief stay due to a bout of OPL — Outright Prolonged Laughter — brought on by reading RHUBARBS FROM A ROCK. You really have the eye and ear for the funny phoibles of our fellow man and woman, and I enjoyed it cover to cover. I hope you are writing more! —Craig Smith

Glad to see that you are writing a new book with the same and very witty pen (keyboard), R.o.R. certainly was too short. —Svanhild Sollos, Norway

I’ve just finished reading your hilarious book Rhubarbs From a Rock . It has inspired me to visit Hydra on my next trip to Europe so I can see for myself such eminent locations as “Donkey Shit Lane” and perhaps meet with some of the wonderful and eccentric characters who appear in your book. Hope there’s going to be a sequel.  —Astrid Roy, Johannesburg, South Africa

Not being the type to finish books overnight – I have to admit Rhubarbs has been immensely difficult to put down. A really entertaining read which I give you credit for writing – and for surviving on the Rock for so long. I look forward to Rhubarbs Too. … As a by-the-way – you know the feeling when you’ve finished a good book and can’t get into your next choice? … Well, I got that syndrome with Rhubarbs. Couldn’t get into Michael Palin’s Himalaya (someone I admire immensely) so opted to read Rhubarbs again. I must say, it’s a great second-time-round read, which cannot be said for a lot of books. —Trevor Stokes

Through your experiences, I felt I did travel to Hydra this year! Having been to many of the locations, as I read the Rhubarbs, I felt as if I could smell the scene in my head!  I laughed out loud at the spider story, and “Leatherboy.” The Rams head story was HYSTERICAL. It was a great read … having been to Hydra or not. —Victoria Papale

Elias has read Rhubarbs From a Rock as well and looooved it: he had fun all the way through and was very sad when he came to the last page: he felt as if he had left the island. We are great fans (and believe me, we are also big readers, so we can compare). —Isabelle and Elias Baltassis, France

I was up until midnight reading the book and nearly fell out of bed when I read about Pan going down the cisterna to fetch a pair of glasses in the old Bahia Bar. I laughed out loud many times at the stories about Mardas, the Austrian Countess (her barefootness), Bill Cunliffe, Captain Janis (God rest his soul), and Mikhaili the Boat Man. The next chapter is about Sewage. I can’t wait to read it. —Kelly Shea

These rhubarbs, these portraits are so vividly affectionate that you have achieved the near-impossible: in a single collection of yarns, you’ve cancelled out the mountains of negative bat-droppings we know to be a part of this gorgeous island. I know the bone, flesh and muscle of our Hydra and you’ve, with truth and accuracy, been faithful to them.  Rhubarbs from a Rock  is intelligent, witty, and endlessly affectionate.  Bravo!! —Barbara Lapcek

Subject: The Gods of Hydra Lore from Michael Kelland

Just finished your tome, quite enjoyable. Publisher delivered within 5 days of ordering. HOWEVER, your inaccuracies will be punished by several, if not a multitude, of the myth keepers of the rock. I got Pan down to 2000 drachmas within two days of retrieval and 6 1/2 hours prior to departure. He finally realized the concept of a vanishing asset. It is true that in the 48 hours till success was finalized, bruising did occur from walking at night with sunglasses. I trust subsequent editions will correct the above cited inaccuracy, and my attorneys request a correction in the local newspaper of record.

Regards and HNY to you and yours and other familiar denizens.

Sorry to hear that your spectacles were also a victim of the hole and Mr Pan’s extortion. The Bank recorded in the “historical documents” was not a gent prone to behaviour associated with boozy bruising or wearing shades at night, and he obviously did not have your tenacity in negotiating. A decent, clean-cut fellow.

Any similarity to yourself and the bloke in chapter 2, is therefore pure coincidence, and we will alert the media as such.

Your reputation, I assure you, is intact.