Whenever an unusual vessel lurks off our little harbour, rhubarbs abound. This month a strange-looking, hi-tech floating crane was cause for such instant rumour—one being that the new and somewhat controversial Castello beach resort is now building a new pier to accommodate water taxis and other modes of transport. The immediate response: this would be dangerous to bathers and further ruin the tranquillity of baby beach. Already citizens of our village are divided on the new business, arguing against the music/noise the place generates verses the business it attracts. While it is out of budget for many, it must be said that the new bar/restaurant is making good use of the old armory. Another obvious conclusion was that the crane had appeared to lay a new electric cable, but for once the news is very good. The Assosdivers company were here to connect the new OTE (national telephone company) fiber optic cable to Hydra. It is said that this will greatly enhance the island’s already overcrowded bandwidth for Internet streaming and such. 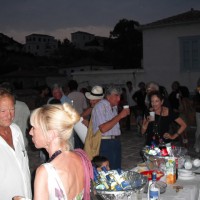 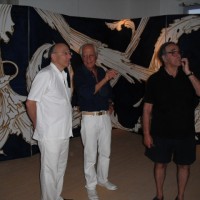 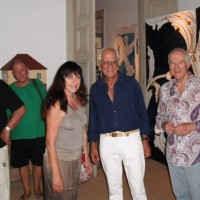 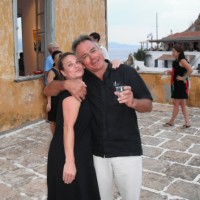 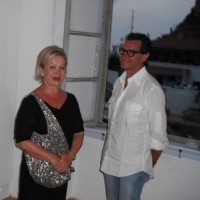 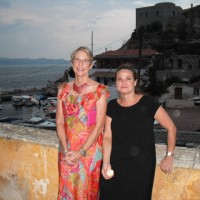 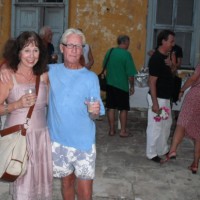 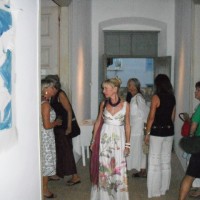 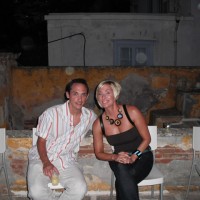 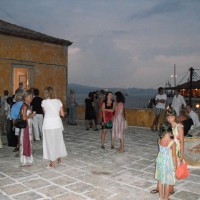 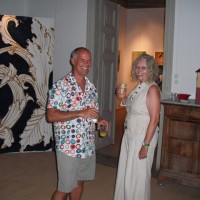 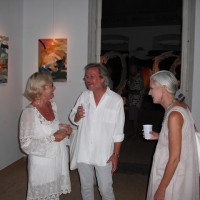 Alas, no grilled shark on offer …

A ducking good holiday in Kamini! We have nicknamed them Trump and Driving Miss, two of the latest additions to Kamini Harbour. They are actually permanent residents of the village who usually live uphill in the valley, but Eleni Petroleka brought them down for a summer vacation on the “pond” (winter being too cold and the seas too rough for year-round port habitation).

A Glass coffin, somehow involving a 150 kg shark, later grilled and shared by visitors and guests of a billionaire host at the old Hydra slaughterhouse sounded like one of those too-outrageous-to-be-true rumours that occasionally filter back to our little village of Kaministan. Sushi anyone?
Photo by Zara Bouchlas

Other rhubarbs included mention of a dawn procession of hundreds following the glass sarcophagus and the discovery of inadvertently drowned drawings. Rich and famous personages from the international art scene were said to have attended, and other equally enticing snippets were banged out on the megapolis of Hydra town’s tom-toms.

Mid-June, boiled-brain, silly-season stuff had started early this year, it seemed. But where there is smoke … there might be fish on a spit, so we decided to pursue the truth behind these ridiculous claims, even though they had nothing to do with our usual stomping ground (i.e., matters west of Four Corners). A local critic gives her unbiased comment on the festivities: “Peee-u”!
Or, to quote one attendee, “Putrid!”
Photo by Valerie Lloyd Sidaway

Well, while all the details haven’t been verified, turns out it was a real “happening” of sizeable proportions and substantial cost, and for once the rumours did not exaggerate. A dawn procession was capped off by an evening feast for five hundred serving up, yup, spit-roasted shark. Doesn’t look like a case of the loaves and the fishes, however, and given the rank odor dinner reputedly emitted, at least a few guests were apparently grateful to go without.

For those not in the know, this type of lunacy is called “performance art” and this “instalation” was named “Blood of Two.” For more serious info, visit Art Observed or for a more playful version with great photos, visit Sebastian Puig’s blog.

Letter to the editor