We can at last put some of the rumours to rest, Castello, a.k.a Baby (Babe?) Beach, is on the brink of opening. Not as a hotel or exclusive bungalows. The beach itself remains free of rows of umbrellas. Nor are there signs of a noisy water sport center. So most of the wintertime rhubarbs were, not surprisingly, based purely on speculation and hot air. A refurbished castle in Kamini

Instead, a rather large, slick-looking, wining-and-dining establishment has been created in record time. Construction and landscaping beat all expectations—a mammoth project converting the old armoury ruin into a modern day castle will have been completed before the height of season. A patio with a view

The exact contents of the menu and the size wallet one will need to frequent the joint will no doubt be revealed shortly, but the good news is that the front in half of the pebble beach remains untouched, and only a couple of rows of chaise lounges occupy the back half. So, it would appear that yaya’s and toddlers retain the freedom to come and go as usual without feeling they are infringing on the exclusive-looking premises, and of course visa versa for the proprietors. Castello is a handsome addition to Kamini in keeping with the style and beauty of our little village. Castello’s view of the Saronic and Peloponnese

Latest “News” Flash: Castello opened last night (June 11) and is, according to first-hand reports, set soon to become a Mediterranean-style restaurant. It is already a nightclub, serving cocktails at standard exclusive prices!

Predicted Future Rhubarb: Sources tell us that Castello will be running its own sea shuttle with hourly service to and from Hydra Port for only €2.50. A novel idea, but if history is anything to go by, this innovation may attract several rhubarbs and potentially invite blockades from the resident water taxi and ciaqui unions! θα δούμε! April Fools! Turned out to be the Italian cable-laying ship “Teliri”
participating in the upgrade of Hydra’s electrical system.
(Thanks to Brian Sidaway for the photo.) The renovations to the derelict armory at Kamini’s Baby Beach.

Contrary to years of speculation and rhubarb, “it” is happening: Baby Beach as we know it is undergoing a major diaper change. And the only thing not under debate? The process has passed the point of no return. Something big is clearly afoot, and it will change the ambiance of Kamini beach forever—whatever the outcome. For obvious reasons, our sources wish to remain anonymous, but a random survey conducted by the Kamini Comet has already revealed a plethora of opposing rhubarbs associated with the proposed new enterprise currently under construction at Kamini’s only, and beloved, pebble beachfront. Rumors and rhubarbs about the future of Kostello Beach, more commonly called Baby Beach as the long-favored bathing area of yayas and toddlers, go back decades. In the late 1980s Richard Branson purportedly planned to turn it into a five-star resort. Nationally televised demonstrations with sarcastic “Keep Hydra Virgin” placards outside courts in the Big Olive summed up opposition to, and ultimately scuppered, that proposal. Later, other tycoons allegedly tried to convert the mansion ruin into a casino/private resort designed to attract the multinational rich-and-dubious to the little beach. But none of these schemes ever came to fruition, or at least none had enough substance to get past the courts. The renovations to the armory seen coming from Kamini Harbor

This winter, however, there is no denying that the old, derelict mansion at the beach’s back, said once to have been Hydra’s armory, is for the first time in memory getting a major face lift.
But what exactly is the project now underway? Speculation is rife, and nobody is quite sure. Some believe the old ruin will be converted into a simple snack bar; others maintain it will become an exclusive accommodation with five-star suites. Perhaps this summer will find the beach graced with umbrellas, chaise lounges, and scantily clad waitresses bearing fruit cocktails. Maybe visitors will a find water-sport facility purveying noisy jet skis and the like. Will fresh-water showers be available for bathers? Will there be a restaurant or bar? What type of food will be on offer, and how much will drinks cost? Will this establishment play music, and what type, at what volume, for how many hours a day?

As one local mustache said, “It gives us jobs and will bring business.”

Another, more conservative local intoned that commercial greed and the attendant tourists and noise will ruin the beach for locals.

“But the waterfront will always be free, so it doesn’t matter,” defended a third.

And, an enthusiastic youth added, the beach would be well rid of grandmas with squalling toddlers and indeed attract topless tourists, a proposition that generated several raised eyebrows and piqued nods.

And, of course, there is speculation about what will happen to the sewage created. Will it be pumped into Kamini’s pristine bay, or will the need to dispose of it properly finally hasten the implementation of a decent, environmentally correct system that will benefit the whole village. Kaminite bathers on the Baby Beach of yore.

All of this, of course, is just the tip of the iceberg that is Kamini gossip in midwinter. The only sure thing is that, as change is coming to Kamini, the accompanying debate will go on. Whatever the outcome—according to some it may be achieved by the 2009 summer season, while others maintain it remains as far away as 2010—we hope the project’s managers conform to regulations and even introduce some ecofriendly measures to our village’s already overtaxed ecosystem.

We shall, of course, keep our readers abreast of any developments.

2009 was supposed to be a hopeful new start, what with Mr. Obama taking over the reins, renewed and revitalized global warming pacts, and a general feeling that a new era could dawn. But the continued downward economic predictions, the atrocities in Gaza, and horrible extended riots in Athens and all over Greece seemed to have blurred all that goodwill for the New Year.

Even in the megopolis of Hydra, there were rumours of a negative nature when our resident doctor got involved in a semidomestic squabble of some sort, which required stitches and medical care off island, so we are temporarily doctorless.

In Kamini, however, we ushered in the New Year with a surprise visit from Santa Claus, a.k.a. Father Christmas (in Commonwealth countries) or, in local lingo, Agious Vassilis (St. Nick). According to the Orthodox calendar, Agious Vassilis doesn’t climb down chimneys on December 25 but on the first day of the new year.

After a long night spent assembling presents to be delivered the next day and preparing his donkey sleigh, we caught Santa letting off a little goodwill steam. 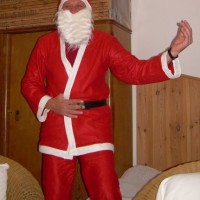 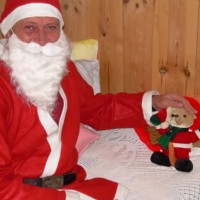 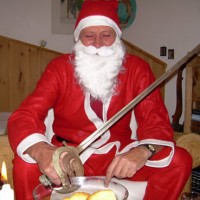 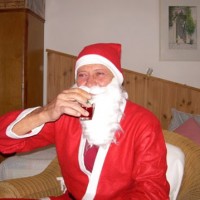 It’s not often that a rumour will entice us to venture into the megopolis of Hydra port to verify the authenticity of a rhubarb, but this was one that needed a firsthand ‘eye-report’. This month Kamini village gossip had it that Hydra was defying maritime and governmental authorities by blockading the harbour to all incoming major sea traffic including our only lifeline to the mainland, the hydrofoils.

Sick of being held over a financial barrel over its transport system to the Big Olive by a single ‘greedy’ shipping monopoly, the citizens of our island decided to take matters into their own hands. With no large ferry to the Rock, Hydriotes have been forced to use the only daily transport into Piraeus, which is not only expensive but baggage prohibitive, being that the hydrofoils limit the amount of goods one may carry. On the 13th and 14th of November ropes, and a string of ciaques blocked the entrance to the port, physically preventing boats from entering. But, in typical Hydra fashion, instead of the protest turning into a naval confrontation, it turned into a party, despite the inconvenience. Blaring music, the odd megaphone speech, and a general festive atmosphere prevailed.

My wife, Jennifer, who rarely leaves the Rock, had gone into Athens to see a friend off and show her the sights, was marooned for three days. Alternatives, such as hiring and taxi and then acquired a blockade-busting Hydra water taxi into Kamini was just too expensive and impractical to justify the trip.

The blockade attracted national media and brought the island’s plight to the attention of a flawed and unjust commuting system.
The major point of the grip was to highlight the fact the hydrofoils servicing the island are way too old, over 35 years, prone to breaking down, and below normal safety standards. Being that it coincided with one of the Rock’s major holidays, St. Konstentine our patron saint, even the Senior Orthodox Beards were forced to come a couple of days early to commemorate the event.

As yet there is no clear outcome to this naval action, but as soon as there is some sort of resolution we will post the result. Whilst it is not our policy to delve into local politics, one rhubarb which did get loud in the local taverna, was that an almost ex-mayor (no names obviously) turned up with some of his PASOK cronies and tried to steal the limelight, and pissed off many residents in the process. And it was said, hijacked the real cause for our self imposed blockade by turning it into a self motivated political agenda