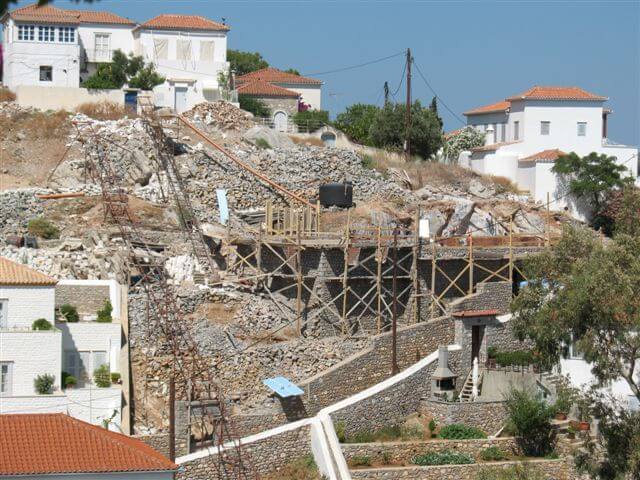 Thus far we have been mute about a matter that now has become a major gripe for the whole valley. At first we decided it was good policy not to complain about the new construction site on an adjacent plot for two reasons. First, it was generating much-needed work and income for a few local builders (and some immigrants to be sure). Plus, to be honest, it might have come across as sour grapes from a disgruntled neighbour who felt the disruption to privacy, view, and tranquility was an imposition (not to mention the constant whine of the compressor starting at daybreak and the drone of the drill boring incessantly into bedrock, spewing white dust and stone chips).

But we had been told the noise would stop before Paska, that our view would remain generally unaffected, and that the result would be an innocuous little spiti (house) built by a not-very-rich local.
So we sat mute, and listened, and listened, through Paska, through April, May, and now well into June. As an old friend here once said, “You can’t believe half the lies you hear around here.”

The local tavernas are being affected, and as far back as end February, renters of a house on the other side of Kamini Valley wanted a refund for noise disturbance. One must say that the jetlike compressor and the incessant drilling, akin to a root canal, have become an eye and ear sore for all its residents, not to mention detrimental to local income.

As one local put it succinctly, a taverna in the valley has been closed down three times in recent years for enclosing the outside dining area with a transparent-plastic wind-protecting awning in order to extend its season into November and to be able to open for Carnival in March. The reason stated was that the plastic violated the eco laws of Kamini Valley. Yet, it too would have extended labour and given the residents an option (the only one out of season) to go out for a meal.

Seems a little unfair. It’s a mystery how a license was granted to build a mansion that is seemingly in glaring breach of the eco laws, as a building this size never existed on this land before. One speculates about brown envelopes and friends in very high places. Others have gone so far as to say that it epitomizes the current situation in Greece. The fat cats are getting plumper on the backs of ever-scrawnier and poorer cats, steaming ahead with their own projects with little consideration for the rest. 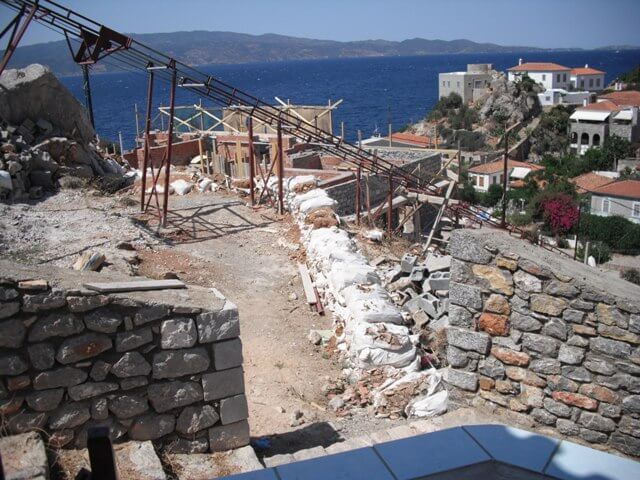