Speculation as to the rather sudden erection of this structure was, as usual, pretty rife because the “wooden hanger” was the first of its type to been seen in the valley in living memory. It has a string of gunship-like portholes along its length but no window to peer in or out looking onto the street. Such construction is usually strictly prohibited on the island, in accordance with various eco-architectural protection ordinances. 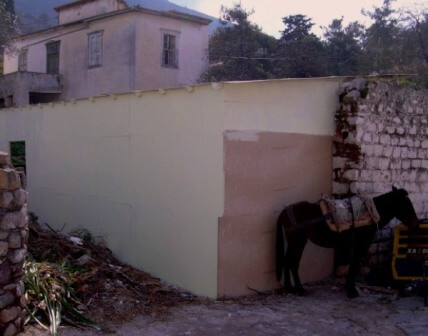 What fanned the rumours was the fact it happened so quickly and work often took place by torchlight after dark—in the depth of winter. Being such a blatant building on the main inland donkey highway, it must obviously have received clearance from somewhere? Conjecture was fairly unanimous that this had required some unusual financial transacting, which in turn led to theories about the type of industry that would occur within the new factory—naturally gossip supposed a business that was below legal radar.

Turns out that special license was passed so that a local carpenter, Adonis, could store his otherwise unsightly piles of lumber (which would previously partially blockade the main road), while permanent permission for his shop was being dragged through the sluggish layers of dawdling civil bureaucracy. In a red-tape decision that for once made sense, yer man’s wood supply would be protected, while the owner himself could earn a living under the same timber roof.