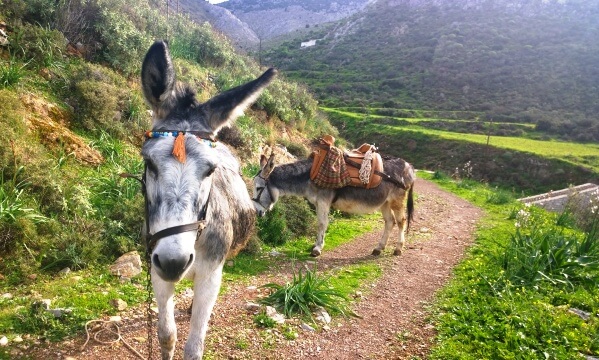 The world has become far too serious. Even on the Comet we have found ourselves drawn into the news and obituary side of matters. An integral part of life to be sure, but we have decided to periodically revert to the more whimsical aspects of our existence in this village.

Imagine you are a dog, a small rescue mutt from the island of Puerto Rico and recently immigrated from the United States to a small Greek island devoid of any motorised transportation. You have become accustomed to travel in cars and met many of your kind while on walks in the dog park. You know about cats, an annoying self-entitled smaller four-legged species, and of course your food dispensers and home providers, humans, in all shapes and sizes.

Several jet-lagging hours, in a loud cage surrounded by suitcases and paraphernalia, later, your human frees you and introduces you to your new home. They call it Hydra.

So now you own an island, with no cars, all sorts of exciting new smells, sounds, and walks; everything is good. Then on your second walk along the coast road to a place called Vlichos, it happens. Your worst nightmare, Jurassic Park stuff barrelling straight down the narrow cliff-side path toward you. Enormous head, huge ears, awful smell, and utterly fearsome.

Trapped!! Your only plan of action is to turn tail and retreat, hell for leather in the opposite direction.

It took some hours and much coaxing out of a distant village to find and lure her back to the safety of her house. It was explained that she had better get used to these new beasts—they were called mules or donkeys, and whilst top of the food chain size-wise, they were not carnivorous and had no plans to interfere with doggie territory. They kept to themselves and, if you yielded right of way, would not kick you into next week. 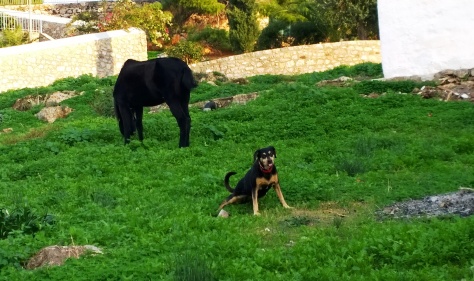 Safe to Pee these days.

It is a global phenomenon particularly accentuated in Greece and even more so on Hydra, our vehicle-less island, which hasn’t got the hum of traffic to dull the pitch. Barking dogs, not just woof-woof, but the eternal, nonstop, day-and-night noise of a bored dog with nothing better to do but announce its presence from a walled-in garden or tether.

Of course, the owners are to blame. Dogs can be taught not to bark incessantly. Some locals, however, refuse to believe that. One day when Toby, our big dog, started barking for no reason, I went out and inflicted the usual disciplinary process and whacked him on the bum with a sock. A passing neighbor informed me that I was wrong to do so and that it was natural for dogs to bark. “It’s what they do,” she announced.

Not so. Toby never barked when we were at home, unless an unknown human or alien animal was invading his hill.

If, on occasion, we left him on the terrace when we went out, however, he would give a short bark at three-second intervals until we got home. It took us a while to figure it out that whilst Toby was a very smart pooch, he didn’t grasp the concept of an echo. So he ended up arguing with himself: “This is my land.” “No, this is my land,” the opposite side of our valley would reply. “No, it’s my land!” And so on ad infinitum. Thus he talked himself out of the freedom of the terrace when we vacated the house.

Irish Tony of Vlichos once took his rural island dog, Socks, across to the mainland to pick up some building supplies. Socks did not know what a truck was. So when it “ate” his human (Tony climbed into the front seat), he went absolutely bananas and attacked the front “leg” (tire) of the beast with a ferocity we didn’t know his gentle pooch possessed.

One winter, while visiting our friend Pedro in Cape Cod, we took the dogs on a long beach walk one afternoon. Not a soul to be seen on the endless miles of sand, until the speck of a human way down at the end appeared. Toby, still of sound sight and hearing in those days, immediately declared the entire waterfront his by yelling at the distant intruder. Toby, a rescue mutt from a pound in Virginia, also had a nose for garbage. No amount of training could dissuade him from it. If one blinked, he was into the trash. Years later Pedro returned to the island, and when he came to Kamini, he spotted just the bum of a dog protruding from a rubbish bag outside Zoe’s pension. “I would know that bum anywhere” Pedro said. “Hello Toby.”

One advantage of living in Kamini is that, because there are no cars, it is safe to let our doggies run around the hill on occasion. They know their way around and generally come home within half an hour. One afternoon, Belle, the more couch-bound of the two, didn’t return. After a couple of hours we started to worry and went in search.

Now, everyone in the valley, indeed most of the island, are acquainted with our pets, and we asked the usual suspects if they had seen our smaller dog. “Oxi.” Not a glimpse. Most strange, so we expanded the search as far as Vlichos and Mandraki.

By the next day we were seriously concerned and most puzzled. A dog doesn’t just vanish into thin air on the island. Then, shortly after midday, we got a phone call. Belle had been spotted in the company of a tourist, who was instructed to call us.

When I demanded to know why the woman had abducted our dog for the night, she said that the doggie had “looked lost” and taken her home. Did she not notice the bright red collar, the flea collar, the ID tag? If one found a child in the street “looking lost,” did one just take it back to one’s hotel room?

We were not amused, to say the least.