A Day to Forget

Hollywood made a movie about it, an event that shocked the world. At the time of its occurrence the Achille Lauro cruise ship hijacking made world headlines, a drama mainly remembered for a poor fellow in a wheelchair being tipped overboard. History can be a fickle thing; another nautical calamity in the late eighties occurred just a few miles down the Saronic Gulf and has gone largely ignored in the annals of terrorism. 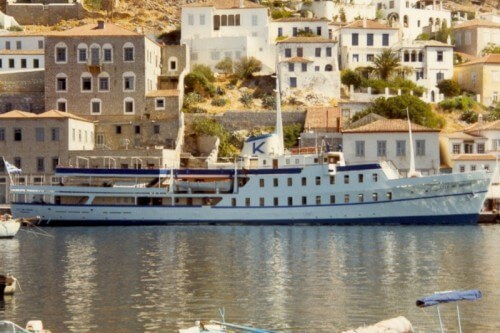 I was reminded of the incident by a photograph posted on Facebook recently by the Hydra Once upon a Time group of a cruise ship named The City of Hydra that used to visit the Rock daily. I’m pretty sure the circa 1970s date is a bit early, but it and its sister ship, The City of Poros, were a regular sight in Hydra harbour. The Hermes, another three-island-one-day cruise ship of that time (the one which dumped me permanently on the Rock), moored for an hour each afternoon, and the “Cities” took morning shifts.

This particular day was pertinent because an English tourist off the boat was sitting at an adjacent table to us at the Liako, our breakfast club. I remember because when The City of Poros tooted to signify imminent departure, the lady leaned across to us and said she had overheard us speaking English and supposed we were local residents. She then offered us her chunky Sunday Times newspaper, a novel gift in those days as none of us had television or any form of news input apart from the weekly thin Athens News. That evening we started to hear rumours of an almost unbelievable attack on the selfsame cruise ship.

Until a couple of hours later

There is no point in going into the gory details and specifics of the assault, suffice to say that nine innocent people were slaughtered and almost a hundred tourists hospitalized. The executive officer was made to kneel, it was reported, and executed with a shot pointblank to the back of his head. A bungled car bomb and an escape in a high-speed boat all formed part of the sad antics that day. There is no real point to this blurb, other than as a reminder that insane acts of violence often get comparatively swept under the carpet for reasons we couldn’t fathom. Perhaps to protect tourism?

A small, quirky twist to this tale is that soon after this tragic attack, security screening and detectors were installed at the Flying Dolphin departure points in Marina Zea. One pushed one’s bag on roller conveyors through an airport type X-ray screening device. Only in Greece; come fall. the usual paraphernalia of islander big-city shopping was shunted through security, including, when hunting season began, shotguns, rifles, and ammunition. With alarms blaring identification of lethal weaponry, the mustachioed gents in camouflage were waved past as normal.