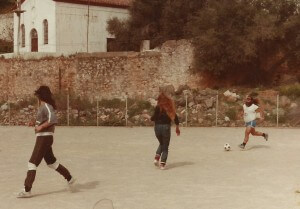 Back in the winter of 1985, a sporting event happened on Hydra, and if it had been officially sanctioned, it would still hold several records in the Guinness Book of …

It all began in my bar, the Bahia. A debate led to a soccer match unprecedented. The expatriate world against an Hydriot squad of sporting enthusiasts.

I am going to call the sport soccer, as opposed to football, which a bunch of fans call it. It should be called football as it entails kicking, and the use of hands is not permitted. Football for some obscure reasons is a North American sport which uses hands to get the ball around a field, and only rarely is it kicked. Even then a specialist is brought on to boot a field goal through a set of posts that resemble those used in rugby.

Again, to clear up any confusion, while the shape of the ball, ovalish, and the goal posts require one to kick the ball twixt posts and at a level some meters above ground, the American sport has nothing in common with the more internationally recognised sport called rugby.

Americans are allowed to use body armour and crash helmets and may take frequent breaks to catch their breath so that sponsors may ply their wares and pretty, leggy girls can wave pom-poms and high kick in mini skirts to keep the fans occupied, lest boredom set in.

Our sport has rules too, in case one may be under the misapprehension that on this side of the puddle, we play a game for wussies. For attempting to garrott an enemy player, one earns the ignoble decision of ten minutes in the sin bin. If a player is bleeding too profusely, he is entitled to ten minutes’ stitching in the blood bin.

Okay so lets get back to our international match, which, by the way, did accumulate trips to the blood bin due to the coarse nature of the gravel pitch and the lack of perpendicular participation of contestants, aided no doubt by the regular half-time alcohol-laced refreshments. 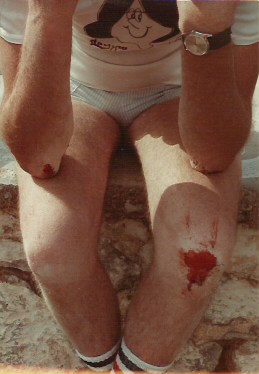 Pan was our man on the other side, employed to recruit a team of Hydriots brave enough to take on the rest of the planet. With the exception of Pan and Janni Drakopolos, the average age on their side was nineteen; on ours, it was about 40 or 30 or 60.

Ouzo Jimmy was the ref and doubled as refreshment dispenser, which meant he situated himself behind the goal line, next to the porta-fridge, and conducted the match behind a dangling fag of smoke.

Somewhere during the game, the girls decided that they couldn’t kick as far as the gents and allowed themselves to throw the ball (I believe that is how rugby was invented). And so the match progressed. Every time we were losing too much, Pan switched sides and became an American, generally right in front of the goal and evened the game up.

Pan, bless him, was a dual citizen. Having supposedly been caught jumping ship in New York, he was offered deportation or US citizenship if he went on a vacation to Vietnam. Which he did with distinction. 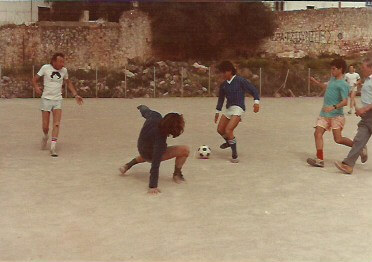 At the end of the tournament, because how many goals had been scored could not be determined, we took the discussion down to the ‘office,’ the Liako taverna. It was agreed that the score was an even 22-22 draw, in itself another Guinness book record. 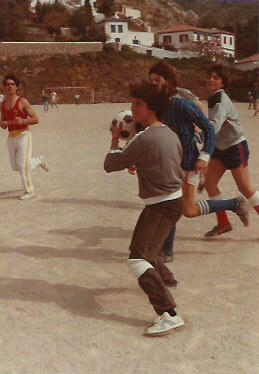