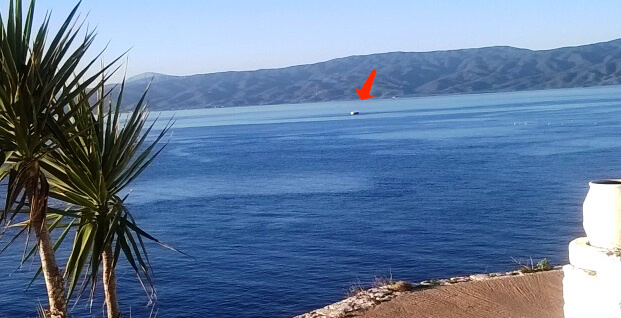 Sure, it doesn’t look like much now (my camera phone’s zoom isn’t too strong), a small, innocuous platform bobbing off Kamini. Imagine this same view in a couple of months’ time with a thirteen-ish-deck, multi-swimming-pooled, super cruise ship inserted into it.

Our new deep-sea heavy mooring platform, designed to anchor the largest of oceangoing luxury liners, was “planted” last month. It is hoped that the guests shuttled back and forth on its tenders will boost the island’s economy and bring all the benefits that such an increase in tourism promises.

As with all things of “progress” here, or anywhere for that matter, a flip-side debate has kept the island busy this winter—and not just about the pros and cons of said affected view.

What about the gulf and the pollution such large ships can bring to the beaches? The island struggles to cope with current busy-season ablutions. What will hundreds more visitors do to an already taxed infrastructure, etc, etc?

All of which is rather moot as the mega buoy is in place.

Of course, any big event on (or just off) the island comes with a typical Hydra rhubarb. A couple of days after the cranes and work ships had completed their deep-sea task, a large French cable-laying ship was seen in the same area. Much activity aboard led to the inevitable conclusion that the sea anchor industry had severed a communications cable to the mainland, much in the same way we have seen, say, waters pipes conflict with other underground systems when upgrades are being installed on land.