The month of March kicked off with a major rhubarb and has a direct link to Kamini that hit national headlines. One of Greece’s wealthiest moguls was handcuffed and incarcerated in front of the Athens media on various charges related to missing money, as in supposedly owing the government millions of euros that had gone up in, er … fumes. 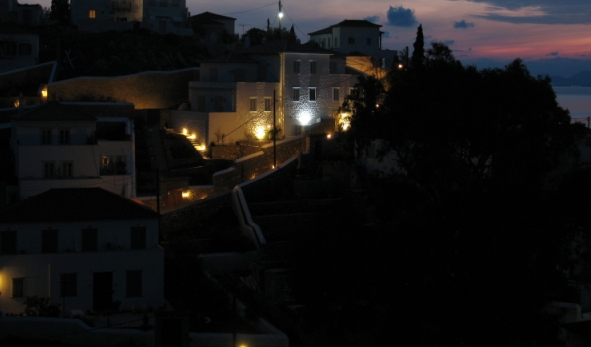 Although he is mentioned by name in the press, out of courtesy to our neighbourhood and respect for his anonymous status in the valley, we shall call him Mr G. Speftis, CEO of a very large petrol company. He has proclaimed his innocence (in Greece one is presumed guilty until otherwise proven), saying that there is no evidence, no paper trail, no e-mail or phone records linking him to the mysterious “up-in-smoke” millions.

True to form, our little village community took opposite sides in this new development and the ongoing saga concerning a legally dubious construction of some size that now dominates the quaint valley. Bear in mind that Hydra has “strict” laws concerning size of building per square meter of land, and whether or not there was indeed a building permit issued, without the use of a brown envelope, is still a source of debate.

Many west-facing (sunset) residents in Kamini still have a beef with the mansion, even with the alleged embezzler behind bars and the place unoccupied.

“It is so in our face every night, even though the house is empty,” one local grumbled. “We count around twenty spotlights, these glaring at night in the mid-winter, and in summer somewhere approaching fifty.”

These not only incur the cost of electrifying the hillside, but they are supposedly being used in illuminating the region for CCTV cameras he has strategically placed around the mansion. … So very in-keeping with the spirit of the valley.

There are those, however, who think the lighting and brightness have enhanced the valley.

“It’s always been so dark in Kamini, finally some lighting brightens the area,” one ‘pro’ resident insisted. Like we say, always two sides and always a rhubarb no matter how cut-and-dry a story may seem.