A Bunch of the Usual Suspects 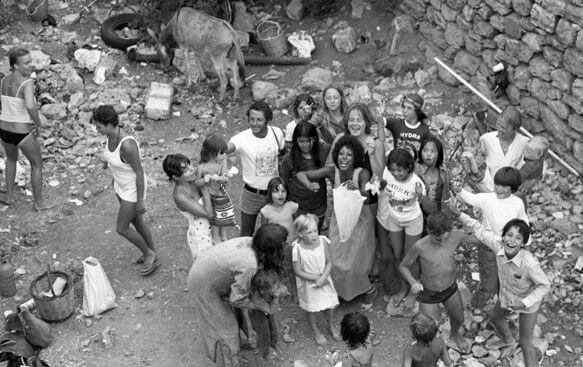 This photograph was taken by John Paul Jacques in the ruins of a pre-umbrella Castello. Maggie Martin, who passed away this summer near her home in Thailand, is in the centre. The happy crowd surrounding her includes the following people: Simone (Maggie’s daughter); Christina Kingsmill; Tayu (Barbara Lapcek’s daughter); Evelyn (Nicky and Robert Hale’s daughter); Vassily; Lena Cunliffe and her daughters Cathy and Caroline; Helle (Rie and Robert Goldman’s daughter); Thor (Alison Gold’s son); Joel (Thor’s friend); Kathy (Johanne Goldman’s friend); Amanda Divine and her daughter Fern. The donkey’s name was Oswald. The Goldman family borrowed him from Lilly Mack that summer—probably 1979. Maggie and Christina are remembered with much love by many people.